Not all Kampot Pepper is alike. The care taken by FARMLINK in the drying, cleaning, sorting and grading processes as well as the storage conditions are critical in revealing and preserving the delicate aroma of Kampot Pepper. 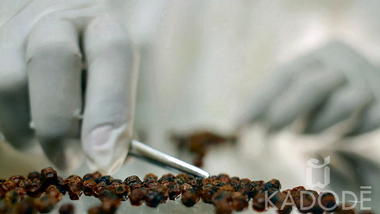 FARMLINK is that vital link in the supply chain. We are a meticulous processor of the raw product from farm to export, establishing and continuing to ensure the highest standards in the cleaning, grading, sorting and packaging of our pepper.

After an initial sun drying process in the farms, our Kampot pepper is then carefully washed again in our premises and sun-dried under controlled conditions for 2-3 days. All our KADODÉ Kampot pepper is hand sorted, corn-by-corn, leaving only the best corns in the final bag, always vacuum packed to preserve the delicate but powerful aromas. These exacting pepper processing systems guarantee that our products fulfil top international food safety requirements.

KADODÉ brand is our promise that the pepper you buy from us is authentic Kampot pepper, cultivated by our selected farmers in Kampot province and processed to our exacting standards and controls in order to reach you in the freshest condition.

Visit our distribution website to find out where to buy or how to become a distributor. 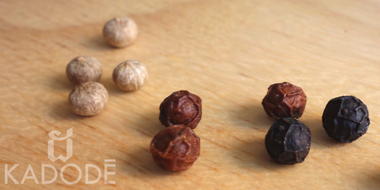 KADODE Kampot pepper black :
When the pepper berry starts to mature and goes from a dark green colour to slightly yellow, it is harvested to produce black pepper. Berries are sun-dried. During the drying process, the outer husk becomes hard and black to become the black peppercorn we know. KADODĒ KAMPOT PEPPER BLACK has a strong character but yet a delicate aroma. After a first powerful peppery taste, it reveals outstanding aromas of flower, eucalyptus and mint. Freshly ground KADODÉ KAMPOT PEPPER BLACK is sublime sprinkled on top of salads, pasta, pork, beef or lamb recipes.

KADODE Kampot pepper red :
When the pepper berry is fully mature and turns bright red on the vine, it is harvested in a selective manner onto the grape to produce red pepper. KAMPOT PEPPER RED delivers a powerful and fruity aroma. Its taste combines the spicy, mature flavor of black pepper with a sugary sweetness. Freshly ground KAMPOT PEPPER RED will delight you when sprinkled on top of salads, pastas, pork, beef or duck recipes and desserts.

KADODE Kampot pepper white :
When the pepper berry is fully mature and turns bright red on the vine, it is harvested to produce red but also white pepper. The white core is extracted and then sun dried. This exceptional quality white pepper should not be confused with common white pepper obtained from the mechanical processing of black pepper. KADODÉ KAMPOT PEPPER WHITE delivers an intense bouquet and delicate aromas. Its strong spicy taste carries notes of fresh herbs and lemon. Freshly ground KADODÉ KAMPOT PEPPER WHITE is fabulous sprinkled on top of a fish fillet, salads, and vegetable recipes. 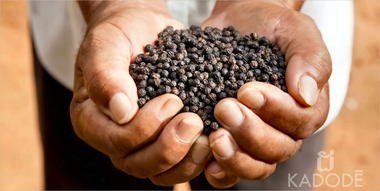 At the beginning of the 20th century Cambodia was exporting around 8000 tons of Kampot pepper. In the 1960 there were still 1 million pepper poles in Kampot, producing around 1000 tons. After the fall of the Khmer Rouge regime, only 4 tons were harvested by the end of the 90's.

Farmers in Kampot have multiple generations of experience in pepper cultivation and produce the highest quality pepper employing a combination of traditional and modern methods.

The birth of Kampot pepper

The Chinese explorer Tcheou Ta Kouan recorded Cambodian pepper cultivation as early as the 13th century. In Kampot, the modern era of intensive pepper production can be traced back to the 1870s. The Sultan of Aceh, who did not want to leave his wealth for his Dutch enemies, burned his pepper plantations down in 1873. Part of the production then moved to Cambodia’s Kampot region.

Kampot pepper's flavour and intense aroma have made it one of the most highly regarded peppers in the world - the unchallenged champion of spices in the kitchens of the most renowned French chefs, and widely referred to as ‘The King of Pepper’ !

FARMLINK is proud to be a part of this rich heritage and the bright future of Kampot pepper.

Kampot Pepper was the first Cambodian product to be granted with Protected Geographical Indication (PGI) status. This label, certified by ECOCERT, guarantees a required standard of farming methods and techniques amongst the members of the PGI. Respecting the official ‘Book of Requirements’ is essential to obtaining certified Kampot Pepper. The PGI regarding Kampot Pepper ensures consumers are not purchasing counterfeit sub-standard goods.

The pepper plant grows on traditional wooden poles, which are carefully separated by a defined distance to ensure all plants have sufficient nutriment. All Kampot Pepper cuttings for a new plantation must originate from Kampot's terroir. Natural fertiliser and new soil has to be added each year to each pepper plant pole.

Situated between the mountains and the sea, the special climate and soil type found in Kampot province, combined with the experience of multiple generations of farming expertise, make this pepper unique. Its distinct aroma – strong yet delicate, aromatic and unmistakable – makes Kampot Pepper highly prized by gourmets worldwide.